Today we have the blog tour for TAKEN BY STORM by Annalise Delaney! Check it out and be sure to pick up your copy today! And check out SAFE IN HIS STORM, on sale now! 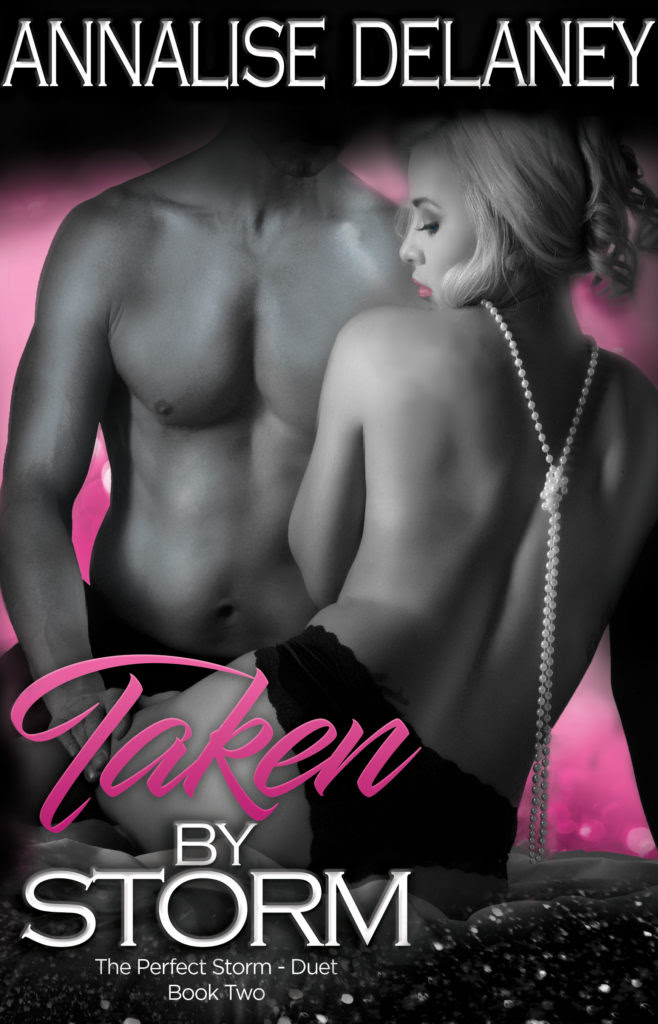 About Taken By Storm:

Devastated. Desperate. Determined. Months with Jake more than awakened the submissive within Gabrielle. He flipped a switch she can’t turn off. Craving the man who melts her heart and owns her body, she’ll do anything it takes to be his. Even risk the thing she fears the most. Jake would kill to protect his woman. But for the first time in his life, he faces an enemy he can’t destroy. Driven to help silence the echoes of her past, he’ll do whatever he needs to do. Including the last thing anyone expected. 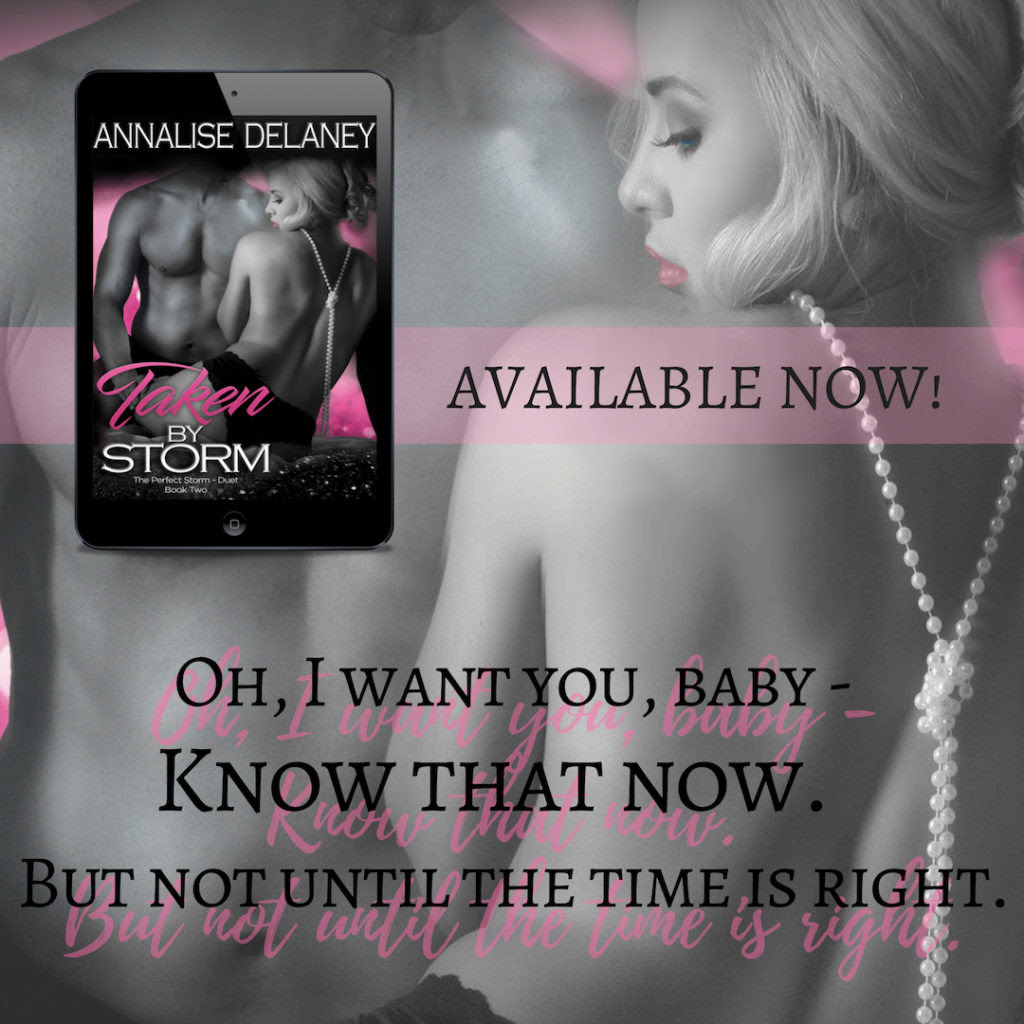 Get Your Copy Today: 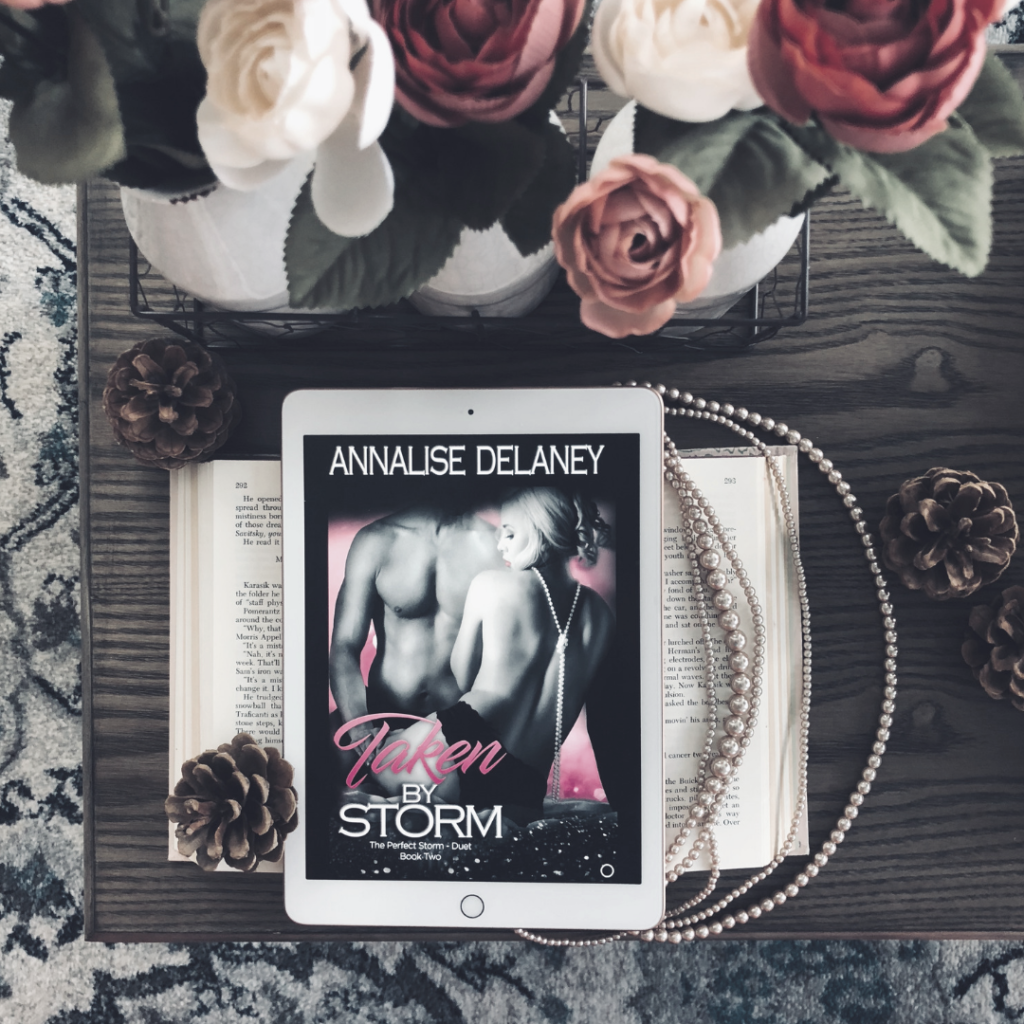 EXCERPT
Gabi pulled her thoughts together and headed toward the door. It’d been a couple of hours since she and Jake had woken up, and...well... If he was downstairs, she wanted to start the day again. The men would be leaving for Vegas again, and she wanted every second she could get with him before they did. Catching sight of her wrist cuffs, she reached for them without thought. But as she touched the soft leather, she remembered they were no longer appropriate and pulled her hand back, leaving them where they waited—ignoring the pang in her heart.
Enough.
She walked over to the mirror to have a chat with herself when something in her reflection caught her attention. Her eyes focused in on blue script peeking out along her collarbone. There’d been so much to distract her, she’d forgotten about Jake writing on her! Stepping closer to the mirror, her heart pounded as she pulled the fabric back to reveal the words reflected backwards.
His Power
She ran her fingers across the script written by Jake and her heart ached. It was one thing to see his words in her own writing, but something altogether different to see them in his writing. But what did he mean by, his power?
She grabbed the hand mirror and pivoted to read what he’d written on the back of her shoulder.
Comes from her Gift
It took a moment to register, but then it clicked. There was something so poignant in that simple statement that Gabi found herself unable to move from the spot. As if almost for the first time, she realized that, without a submissive, a Dominant’s power couldn’t exist. Without a partner, he had no one to lead.
His power came from her.
Not because he demanded it. Not because he wanted it. Not because he decided it.
But because she did.

Get SAFE IN HIS STORM Today: 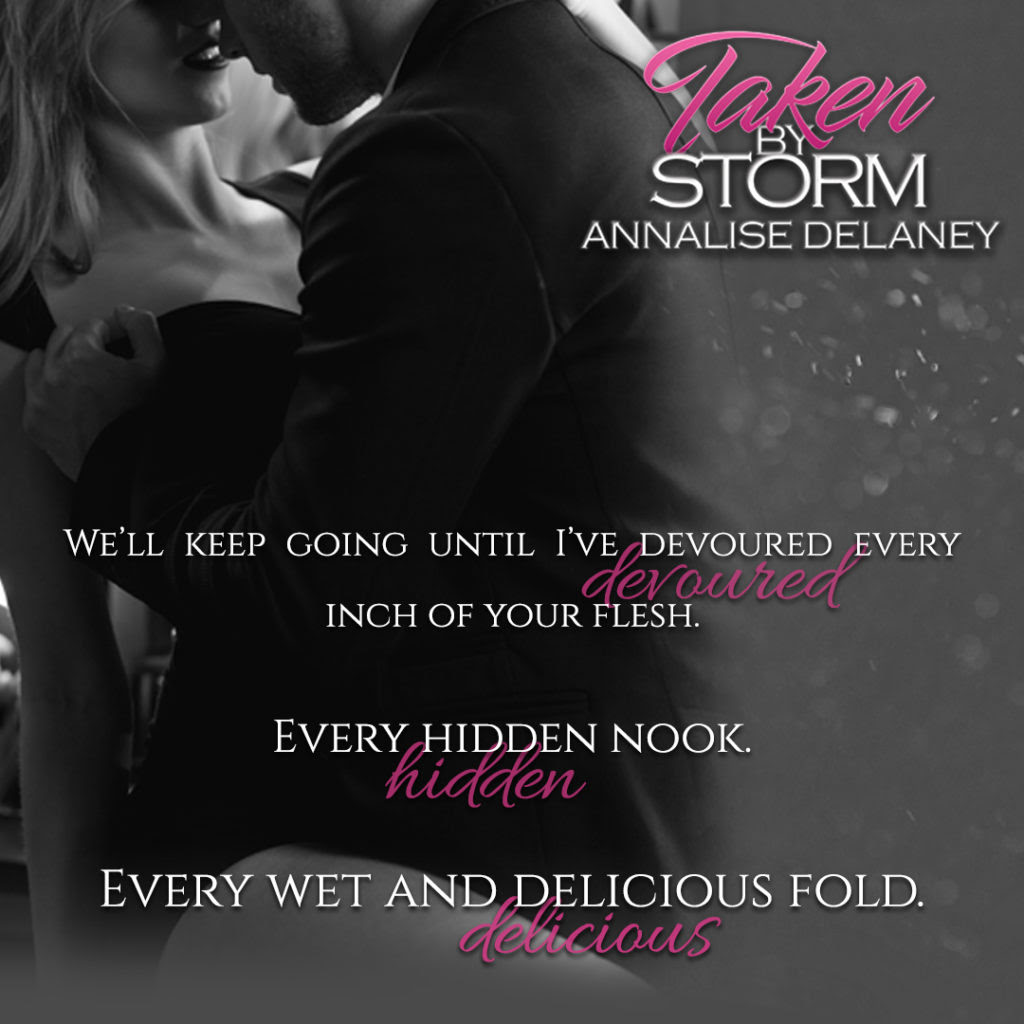 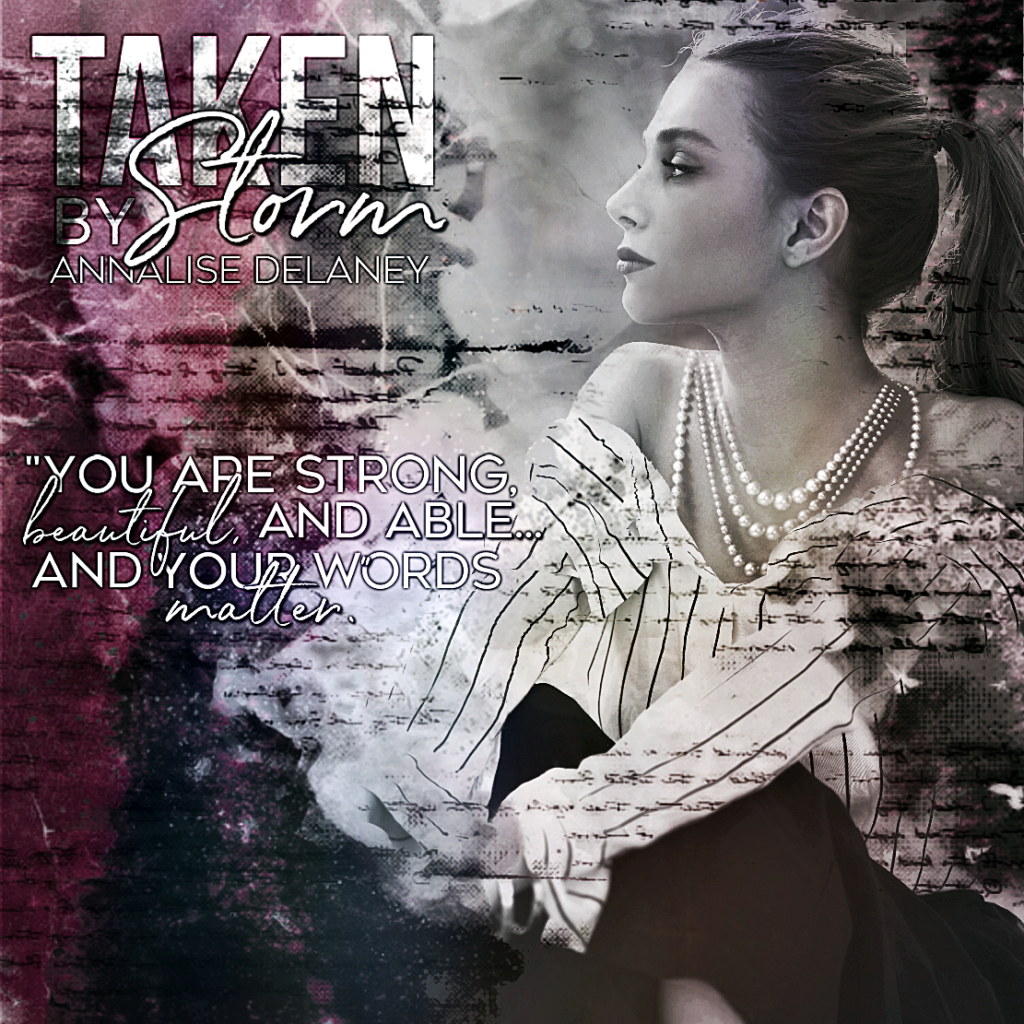 Annalise is an indie author writing contemporary romance with an erotic edge. Her romance novels are packed with twists and turns, emotional tugs of war, a shot of suspense, and a plethora of unapologetically dominant men and the women they crave... All tied together with a good dose of lust and love.   As a girl, writing occupied her time when age-appropriate books put her to sleep. The books tucked in the bottom drawer of her mother’s dresser overflowed with love, passion, betrayal, and revenge—making for far better reads. VC Andrews’ imaginative and twisted stories started it all.   Juggling a busy schedule, Annalise adheres to the motto, ‘Work hard, play hard.’ When she’s not working, she’s hopefully somewhere on the beach, under a palm tree, or where chips, salsa, margaritas, and laughter are abundant.   As for what she reads and writes today, let's just say it's come a long way from sweet. Welcome to the place where sweet meets spicy. A place where sassy stories come to kiss and tell. 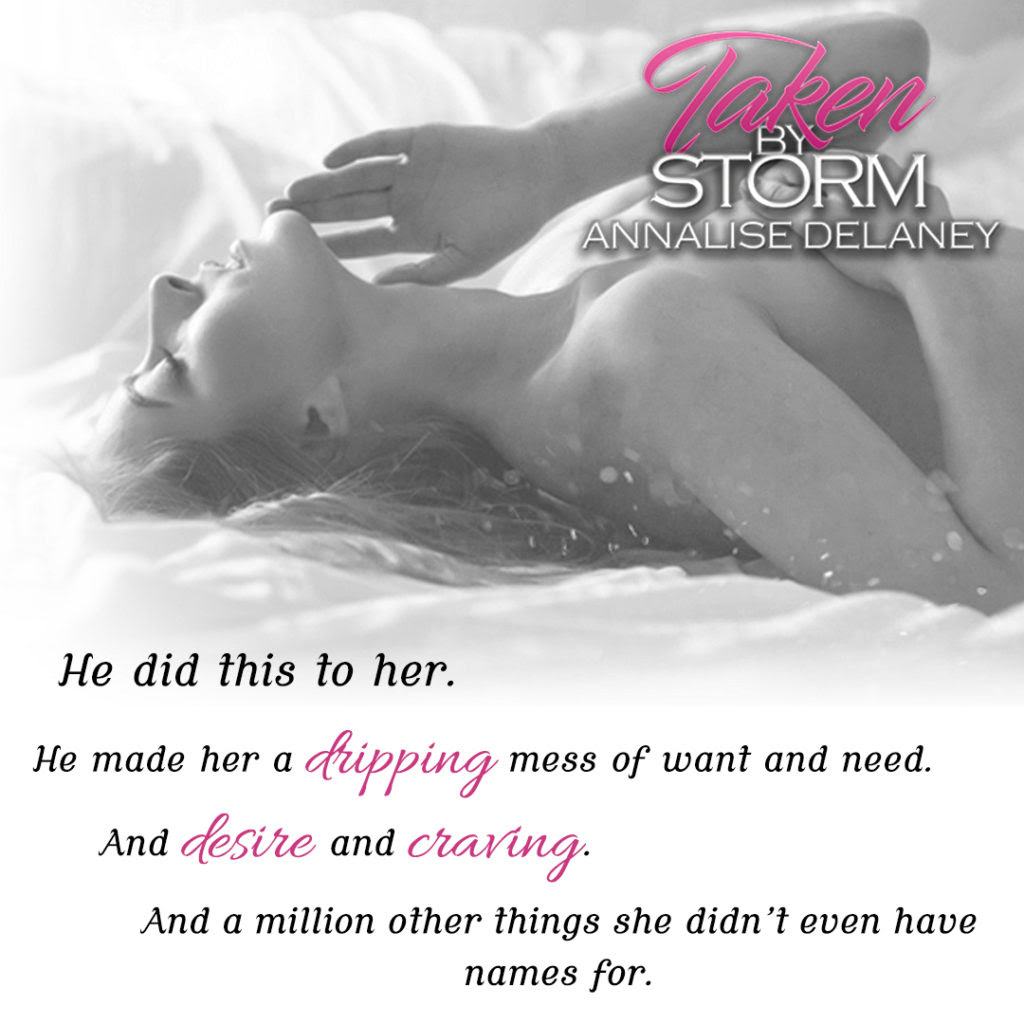