From award-winning author Erika Kelly comes the second standalone title in her brand new, smoking hot series about four elite athlete brothers raised in the Tetons by their eccentric, billionaire dad and uncle,The Bad Boyfriend Series! Don’t miss your chance to meet the dedicated and swoony Will Bowie in THE HEARTLESS BOYFRIEND! Grab your copy today! 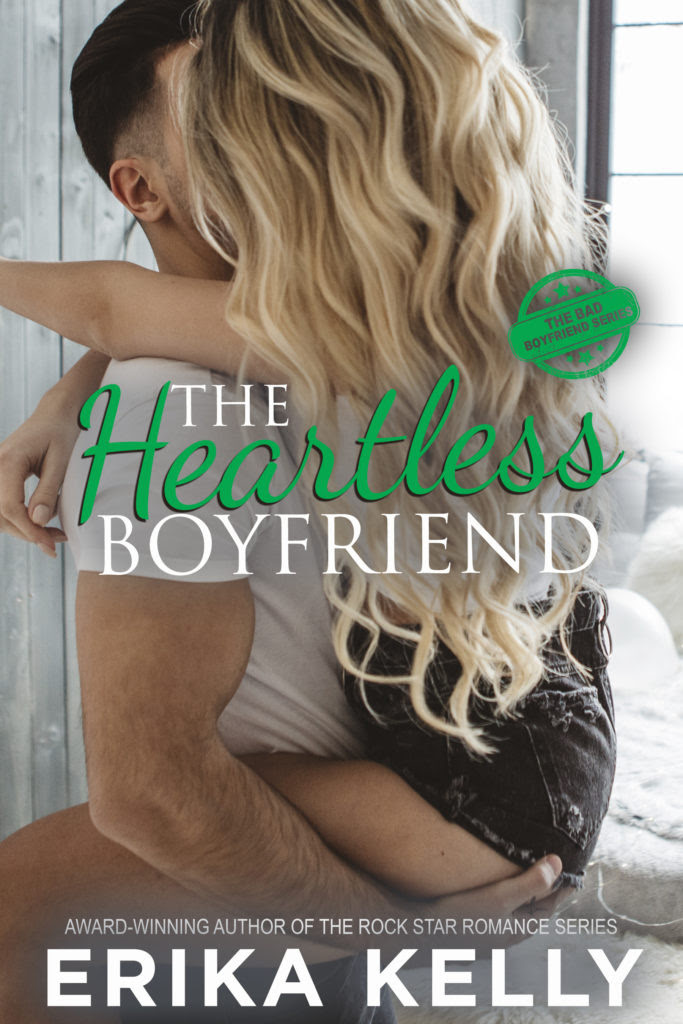 There's not an athlete alive who can match Will's drive and self-discipline...until an adorable two year old and a fiery chef land on his doorstep and turn his life upside down. If he wants to keep his girls, he's going to have to learn to lead with his heart and not his mind.

Will Bowie is supposed to be training for the Olympics, but the toddler unexpectedly dropped into his life isn't interested in his schedules. Still, he's pretty sure he's got things under control...

...until a sexy chef lands on his doorstep and offers a temptation he can't resist.

Hours after losing her restaurant, chef Delilah Lua enters a cooking competition thousands of miles away from home. Winning would resurrect the dream that's been stolen from her. If--no, when--she wins, she'll go back with the capital to open her own place and enough fame to do it with flair. Her roommate, though, is a delicious surprise she hadn't anticipated...

Despite the undeniable sparks in the kitchen, Will's not about to give his heart to a woman who's leaving, and Delilah must decide if the delectable future she could cook up with Will is worth more than a childhood dream.


Grab THE HEARTLESS BOYFRIEND in eBook or paperback today!


Add to your Goodreads 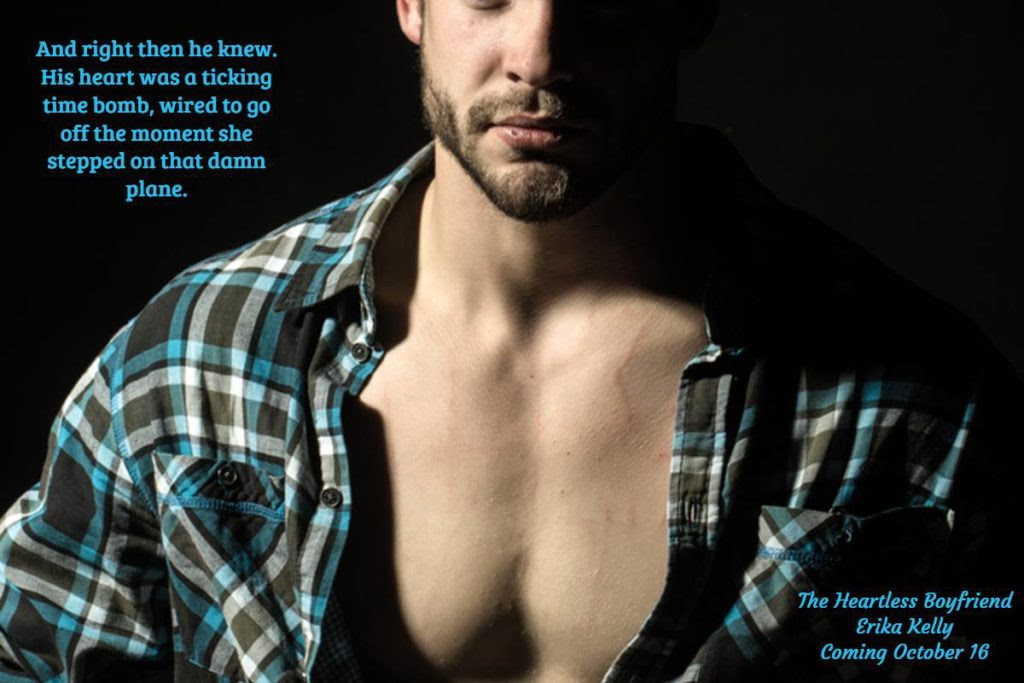 EXCERPT: “I feel like I’m always pissing you off,” Delilah said, as they made their way to the end of the row of conveyor belts. “I just hate not knowing what you’re thinking.” He reached around her to hold the door open, and then they started down a long hallway. “I’m thinking that I don’t have time to drive you around town.” “You just said—” He stopped, bracing his hands against the wall, caging her in. “I’m thinking about Freefest, and how important it is that I get my head on right, that I focus and visualize and do all the things I need to do so I don’t die on that mountain.” God, that look. So intense. Electrifying. “I don’t want to be a burden. I can get around by myself.” But he didn’t look at her like he was pissed or annoyed. No, with his nostrils flaring like that, he looked like he wanted to use both hands to rip her dress wide open and drop his face in her cleavage. And she wasn’t entirely sure she’d stop him. Her pulse fluttered out of control, and desire streamed through her. He lowered his mouth to her ear, his voice deep and husky. “But it doesn’t seem to matter what I’m thinking, because it doesn’t stop my heart from feeling funny when I watch you talking about produce with a dude wearing toe shoes. It doesn’t keep me from realizing that I’ve known a lot of women in my life but none of them—until you—has ever surprised me. It doesn’t seem to matter that I’m really good—and I mean expert level—at blocking out distractions and staying focused because, somehow, you’ve tangled up my wiring. I’m supposed to be thinking about my thrust or my amplitude or page thirty-six in How to Raise Your Orphan Sister, but I can’t concentrate because you keep getting under my skin, and there’s not a damn thing I can do about it.” His chest was right there—close, but not touching. His mouth, a whisper away, and her body yearned for him to close the last inch of distance between them. “I can’t stop from breaking into a run every afternoon, so I can get home to you,” Will said. “I hold my breath because I want to open the door and find you in the kitchen and when you’re not there I hate it. I could easily hire some high school or college kid to drive you around this summer. Maybe get you a scooter—anything so that I don’t have to do it, but I will be damned if I let someone else be the one to take you places. That’s for me. That’s my gift.” Every cell in her body opened up and started singing and clapping to a gospel tune. But she was in a hallway, and the farm owner was waiting for her. “Well, that must be very inconvenient for a man like you.” He smiled, and it was like a bright yellow dandelion pushing up through a crack in the cement. It floored her. “You have no idea.” “If it helps, you’re not my type.” He stepped close enough that his body brushed hers, and she could smell the sun in his cotton T-shirt and the fresh mountain air scent of him that drove her wild. “No?” “Not at all. You’re too disciplined. Too…tidy.” “Would it help if I…” He brought both hands to his head and messed up his hair. She laughed because it was short enough that it couldn’t really get messed up. “A little.” “How about if I got some ink. Like maybe a sunburst right here.” He brought her hand to his chest, just slightly off-center. “And ruin that perfect skin?” She shook her head. “Besides, it wouldn’t matter what you did. I like a man who can surprise me. Not someone so regimented that I can predict—” His strong arm wrapped around her back, and he hauled her to him, pressing his warm, soft mouth on top of hers. And then he kissed her. It was so good, so unexpected, that she practically soared right out of her body. Her pulse quickened, and she had to squeeze her hands into fists to keep from scraping them through his hair. I could fall so hard for this man. He parted his lips, and the way he licked across her bottom one had her drawing in a sharp breath as pleasure bloomed across her skin. He took advantage of her surprise by sweeping his tongue into her mouth, tilting his head, and kissing her like the clock was ticking, and he’d never get this chance again. Sensation flooded her, making her nerves hum and her knees go weak. 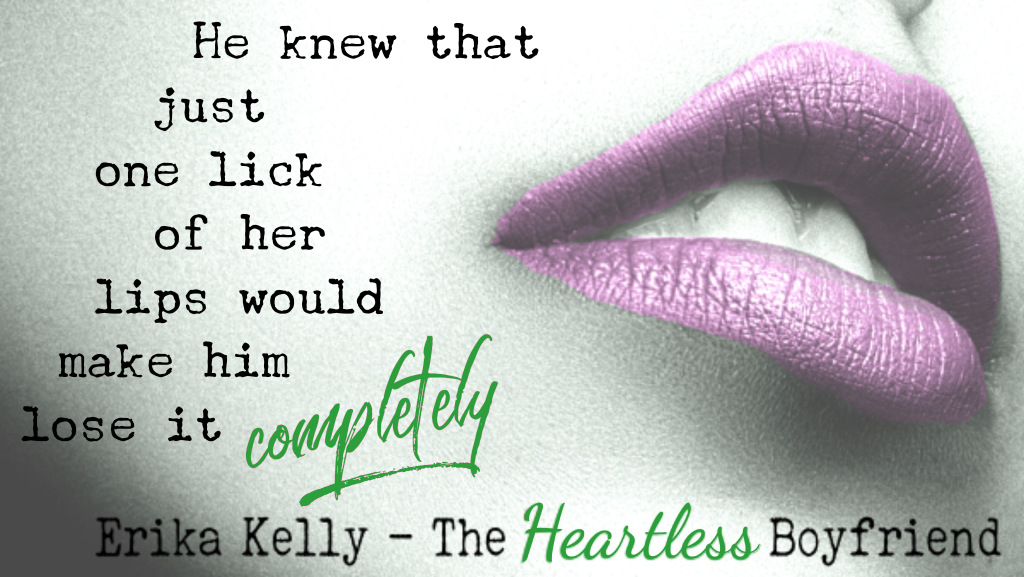 And don’t miss the first book in The Bad Boyfriends Series, THE WORLD’S WORST BOYFRIEND! Grab your copy today! 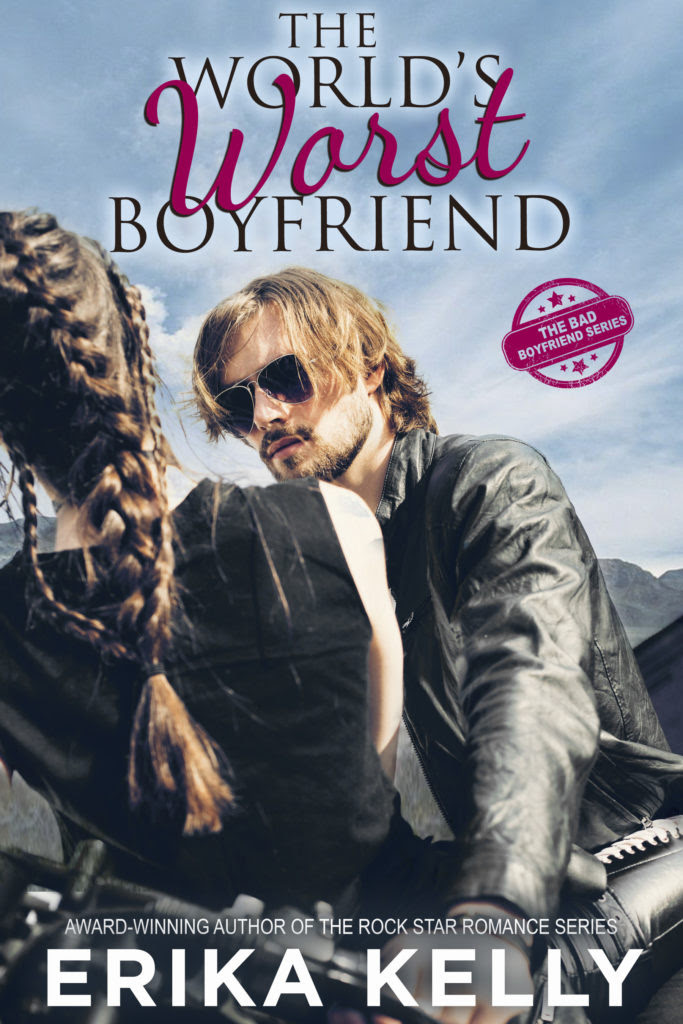 Six years ago Fin Bowie made a decision that cost him the love of his life. Now his ex is coming back to town for her brother's wedding, and he can finally make things right. Except, right before the event, a text he sent goes viral. Overnight, he becomes an international meme. And it's hard to win your woman back when the whole world's calling you The World's Worst Boyfriend. The last thing on Calliope Bell's mind is getting back with Fin. Not when her life's just gone sideways, forcing her to spend the summer in Calamity, Wyoming. She can't be away from the New York art world this long, so she comes up with the idea to turn the hottest pop culture event of the moment into a museum exhibition. The two have every intention of avoiding each other--until the county judge sentences Fin to community service...helping her exploit the meme he's trying to make go away. 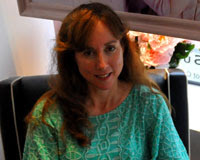 About Erika Kelly: Award-winning author Erika Kelly has been spinning romantic tales all her life--she just didn't know it. Raised on the classics, she didn't discover romantic fiction until later in life. From that moment on, she's been devouring the genre and has found her true voice as an author. Over three decades she's written poems, screenplays, plays, short stories, and all kinds of women's fiction novels. Married to the love of her life and raising four children, she's lived in two countries and seven states, but give her pen and paper, a stack of good books, and a steaming mug of vanilla chai latte and she can make her home anywhere.