A Shifter's Claim by Marie Johnston

Today we have the blog tour for Marie Johnston’s A SHIFTER’S CLAIM. Check it out and grab your copy today! 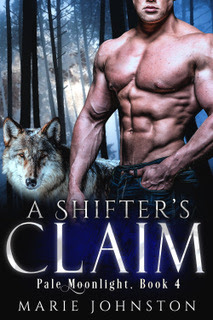 About A Shifter’s Claim:

A shifter without a mate is a shifter without a mind.   It’s been five years since Shilo’s mate walked out on her and she’s been just a little, tiny bit unstable, a feeling that isn’t helped by the impending fight with a neighboring colony. She might not be all there, but even a crazed shifter knows waking up in a stranger’s bed hours from home to find the contacts from her pack murdered means she’s in trouble.   Aimless and restless and unconcerned with anything beyond his next one-night stand, Waylon agrees to act as bodyguard for some shifter pack liaison embroiled in a power struggle. What could it hurt? He’s been aching for five years, and maybe this assignment will take his mind off all he’s lost. But when he meets his client, his world stops. It’s her. His mate. The one he left.   Thanks to their history, he can’t just walk away and leave her as a target. Thanks to her instability, she can’t go home without backup. If either wants to survive the bloody present, both will have to set aside their heartbreaking past and fight for their uncertain future.


Get Your Copy Today:

EXCERPT
Outside, he squinted into the sun and hugged the shade of the building to weave around back where his Jeep was. It’d seen better days—both him and the vehicle. The faded black Jeep was weathered and a rust spot was eating away at a wheel well, but it still ran. Kind of like him. They were still going, just not as sporty as before.
Maybe he should run home and pack a few things.
Nah. With pack business and murders, the female he was transporting had too much on her mind to even notice him.
The drive to the Guardian’s lodge was beautiful as always, and as always, he tried not to notice. Lush trees, space for wolves to run, and the smell of the great outdoors would only remind him of just the beginning of what he’d lost. How long had it been since he’d run his wolf?
Years.
The massive log structure sat at the end of a winding drive. The architecture of the place was genius. The generous windows reflected the woods back to the viewer like built-in camouflage. It was two stories with a full basement. Around it, cabins dotted the woods for Guardians and their families to live in.
He rubbed the sudden ache in his chest. The families out here were tight, had been through thick and thin, and that was not envy burning a hole through his gut.
Parking by the entrance, he jogged inside. Armana’s human mate, Gray, met him at the door.
Waylon had only met the guy when they’d come into the bar to talk with him, but he liked Gray’s relaxed demeanor. The human had nothing to prove and his delight in his new life was palpable. Again, not envy.
“Waylon, thanks for coming so soon.”
The corner of Waylon’s mouth ticked up. Thanks for coming so soon after they’d been trying to reach him for hours. Diplomatic.
“Armana’s with the client now. I’ll let them explain everything.”
Waylon arched a brow. The client was doing the talking. She must have status.
He followed Gray down a long hallway with coded locked doors. Scents assaulted him and he tried to parse through them as he walked, like there was a hidden treasure tickling his nose. One door was hanging open and Gray turned inside.
Waylon rounded the doorway and froze, his boots scratching to a halt against the floor when his gaze landed on the client.
No. It couldn’t be. Anyone but her.
His heart pounded, a deafening cacophony in his ears.
Wide brown eyes switched from shock to full hostility. She stood so fast she knocked her chair over. “No. I will not work with him.”
The venom in her tone knocked his sense back. That voice, so much disdain for him, like her mother, like her father, like half the town he’d grown up in.
Aware of Armana’s and Gray’s growing alarm, he adopted a smile he didn’t feel and drawled, “After all this time, is that how you greet your mate?” 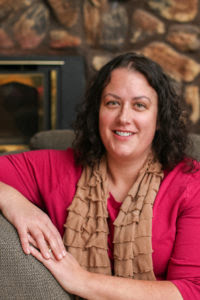 Marie Johnston is an award-winning writer of paranormal and contemporary romance, and a RITA® Finalist. Marie decided to pursue her passion for writing and traded in her lab coat for a laptop to write her first book ever, Fever Claim. She lives in the upper Midwest with her husband, four kids, and two kittens. Other than hanging out with her family, Marie enjoys reading, movie dates with her hubby, getting outside on sunny days, and the all too rare - girls' night out.

a Rafflecopter giveaway
Posted by Kris at 8:30 AM