Blog Tour: In Too Deep by Dani Collins 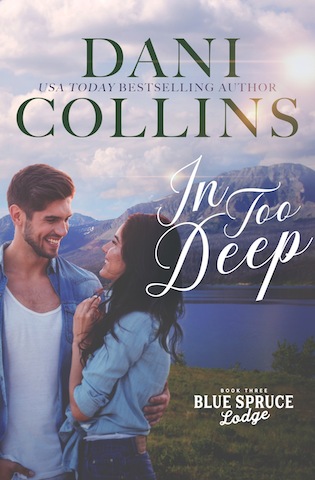 
The family he didn’t know he needed…
At her wit’s end with her twelve-year-old niece, Wren Snow takes the manager’s job at Blue Spruce Lodge so Sky can get to know her father, Trigg Johanssen—a tycoon snowboarder with a playboy reputation.
Gold-medalist Trigg Johanssen is furious she kept Sky a secret, but quits competition to focus on his newly discovered daughter only to have his chemistry with Wren complicate their attempts to co-parent.
When outside forces threaten the ski resort he’s rebuilding, a marriage of convenience seems like the answer. It would give his daughter the life she deserves, but is it too much for a heartbroken woman still nursing past hurts?

Wren has been raising her niece since her sister's death, but things with Sky have gotten more difficult and Wren thinks its time for some changes - mostly allowing Sky to get to know her father and have him be a part of her life.

Trigg didn't know he had a daughter, but as soon as he does, he wants to fit her into his life and have her fit into his.  He's willing to give up his career to work on that relationship as he drops out of a competition.

I really enjoyed the interactions between Wren and Trigg and also Sky during this story. I was hooked and curious to see how things would work out and if they would be able to find a way to really find love together.  The story is full of romance, tension, and of course a touch of heartache and drama.

This was my first book in this series, and while it can be read as a standalone - I do feel the desire to go back and read the previous books. Author Bio:
USA Today Bestselling author, winner of 2013 Reviewer’s Choice Award from Romantic Times Book Reviews
Before making my first sale to Harlequin Mills & Boon in 2012, I spent two decades writing and submitting to every publisher with a transom while holding down a day job and raising a family with my high school sweet heart. Since then, I’ve gone to contract on over thirty books.
While Harlequin Presents remains my first love, I also write romantic comedy, medieval fantasy romance, erotic romance, and small town contemporary romance for Tule Publishing’s Montana Born. In fact, I write just about anything, so long as it’s romance. P.S. I’m also Canadian.