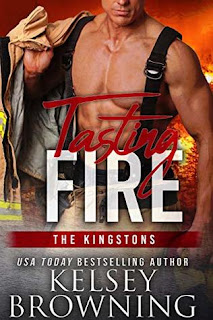 Fire in one hand, ashes in the otherStudious tutor Emmy McKay fell in love with Cash Kingston over a biology textbook, never expecting the high school football hero to give her a second thought. But his feelings for her burned just as hot. All too soon, Emmy’s choices destroyed their youthful relationship, reducing it to a pile of ash. Years later, she has landed her dream job as an ER doctor in her hometown. Now it’s time to win back her dream man.As a firefighter and tactical medic, Cash Kingston is no stranger to white-knuckle situations. But when he learns his beautiful—and brilliant—ex-girlfriend has returned to Steele Ridge, he feels as if he’s standing on the roof of a blazing building. With no escape route in sight. Emmy is the only woman who’s ever had the power to build him up one minute and burn him down the next.But when someone targets Emmy and they begin to suspect the danger stems from their past relationship, it’s impossible for Cash to stay detached. Will the struggle to untangle a web of half-truths bring them closer together, or will it tear them apart for good?

REVIEW
Tasting Fire blends two of my favorite things - second chance romance and suspense - and it does it with quite the tale woven in between.

It's been years since Emmy has been home and in that time a lot has changed - but also some things never change - such as her love for Cash.  Emmy made a mistake years ago - knowing the life she wanted and the plans she had she broke Cash's heart and left but now she's back and she's determined to make everything about her return work out.

Cash is still just as in love with Emmy as he was when she hurt and left him years ago, but he's found a good thing in life, happy in his career choices. So when Emmy turns up back in town unexpectedly he's a little put out and yet he can't quell those feelings of long ago especially not when danger is lurking.

Tasting Fire will suck you in as you move to figure out who is out for Emmy and why, how is it all connected and what will it mean for the love that is still between these two.  The chemistry and connection between Cash and Emmy is powerful, even as there is still a lot of pain and regret lingering between them too.  There's just enough drama and suspense to keep you guessing but it's balanced out by the rest of the story.   Browning has taken current events and used them within the story developing a plot that is easy to connect with and follow while also giving life to these characters and their past, present and future.
Posted by Kris at 9:30 AM