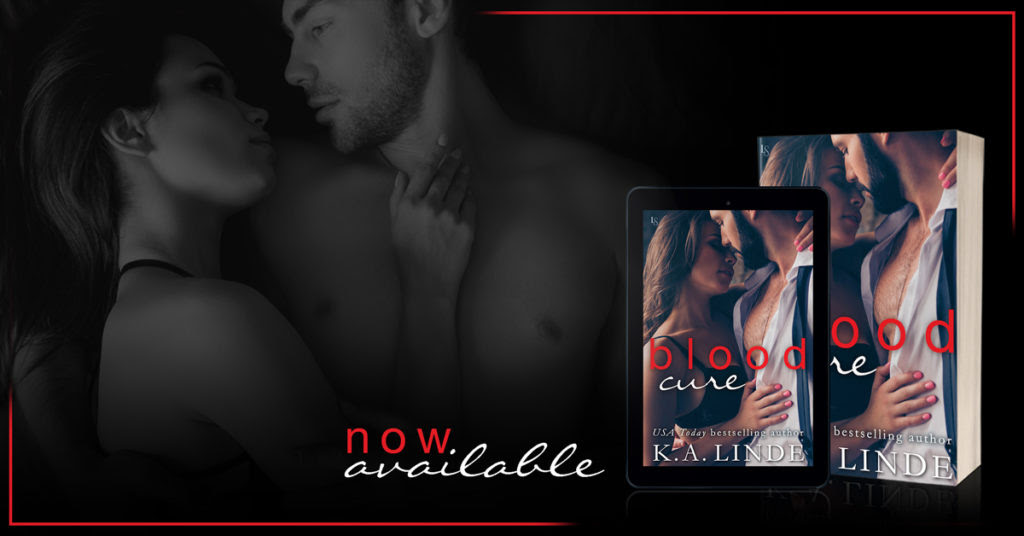 The stunning conclusion to the Blood Type series finds the world in chaos and turmoil with one final battle left to determine who will survive—humans or vampires. She had the world on her shoulders. Now she has nothing. Reyna Carpenter was twenty-one when she became a live-in blood escort for the ruthless and darkly handsome vampire Beckham Anderson. She thought this was just a small price to pay for feeding her brothers back home. But nothing went as planned. Not even her tumultuous relationship with Beckham. And now she wonders if anything will ever be the same again. As she finds herself in the midst of a losing rebellion, she and her trusted friends must flee from a city conquered by the vampire elite. With their plans blown to pieces and everything they knew and loved gone, their future hangs in the balance. Despite all she has lost, Reyna must rise from the ashes, reclaim the life that was stolen—and complete her mission, once and for all. ✦ ADD TO GOODREADS 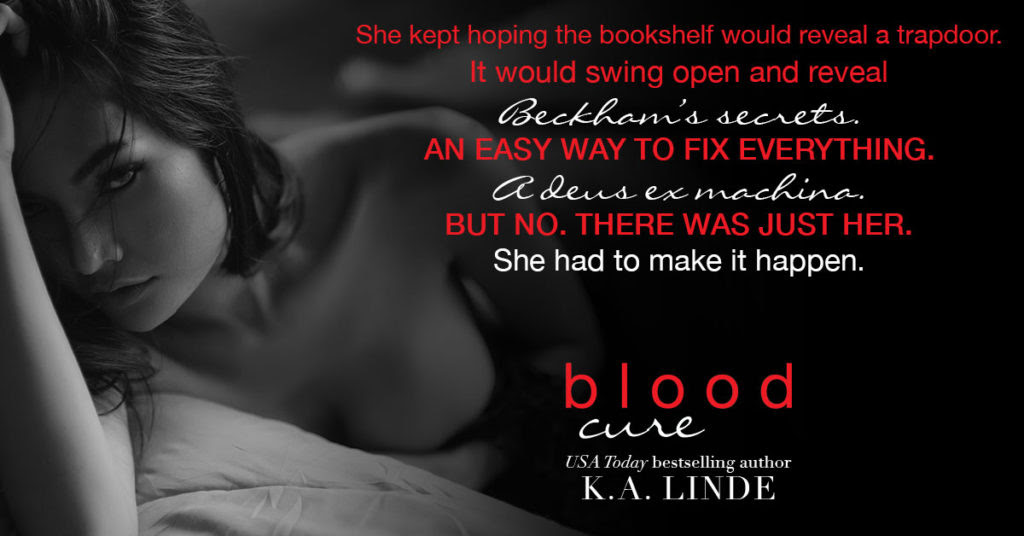 Blood Cure delivers the amazing conclusion to the Blood Type series and no way could I have guessed how things would turn out.

With a raging battle on her hands and stunned at what she's gone through so far, can Reyna take things back in hand and find a way to win over her enemies. She's suffered losses, she's down and out along with her friends and what's left of her fellow rebellion.

As giving any real details about this book would ruin it - I'll have to vaguely blab my love for not only this finale but the whole series. We've gone through so much with these characters, painful moments, emotional twists, devious plots, and so much more - so I've come to expect anything when it comes to Linde, especially after her cliffhangers.

Blood Cure picks us right back up at the madness we were left in, and hit me all in my feels. From devastation at the losses our characters have suffered, to a strong desire to see Reyna win over the vampire faction. This book will take you up and down with so many twists and turns and absolutely keep you guessing.

Linde has done an amazing job delivering this unique world of humans and vampires and the battle between them. 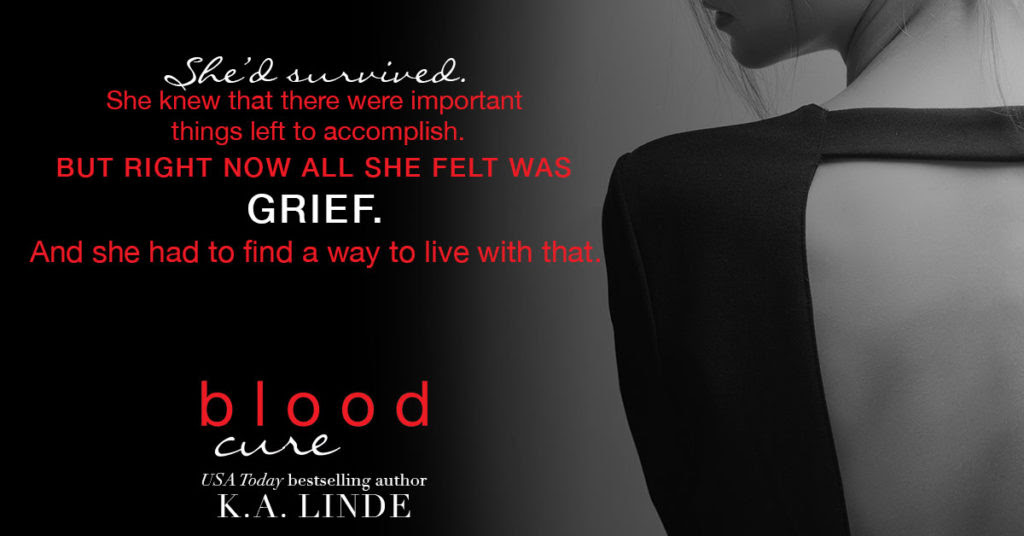 A startling new vision of paranormal romance: When a human ventures into the world of vampires—a decadent milieu of blood-bonds and betrayal—she discovers that not all is what it seems. For Reyna Carpenter, giving up her body isn’t a choice. It’s survival. In a civilization laid waste by poverty and desperation, Reyna accepts a high-paying position with the wealthy and hungry vampire elite. Her new job is as the live-in blood escort for the intimidating, demanding, and devilishly handsome Beckham Anderson. He’s everything she expected from a vampire, except for one thing—he won’t feed off her. Reyna soon discovers that behind Beckham’s brooding, wicked façade lies a unique and complex man. And that, in a dark and divided world, she is more valuable than she ever would have believed. For with each passing night, Reyna can’t shake the sensation that it’s Beckham who’s afraid of her. Note: Reyna and Beckham’s story continues in Blood Match. ADD TO GOODREADS

As the provocative, sensual Blood Type series continues, the rare bond between Reyna and Beckham is threatened by betrayal, greed, and twisted secrets. A desperate human. A powerful vampire. A world divided. Reyna Carpenter was promised paradise. She was delivered into hell. Giving up her body for money was supposed to be the hardest part of becoming a blood escort. She never expected to lose her heart to her dark, enigmatic boss, Beckham Anderson. After being taken by a depraved captor who plans to rule the world, Reyna will do anything to return to Beckham. She just has to find the will to survive this game. From the pawn, rises a queen. Note: Reyna and Beckham’s story begins in Blood Type and continues in Blood Cure. ✦ Amazon US ✦ Amazon UK ✦ iBooks ✦ B&N ✦ Kobo ✦ Google Play 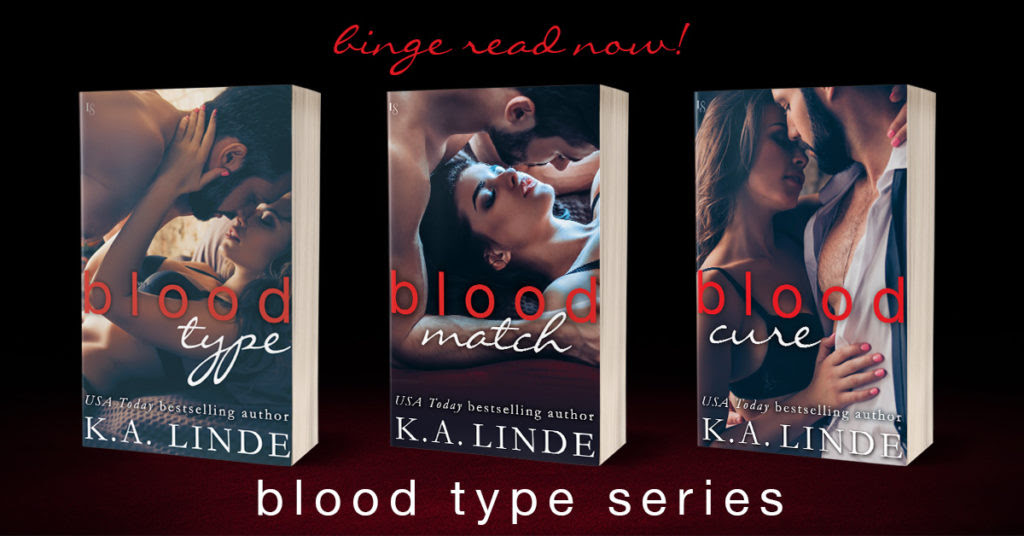 K.A. Linde is the USA Today bestselling author of more than fifteen novels including the Avoiding series and the Record series. She has a Masters degree in political science from the University of Georgia, was the head campaign worker for the 2012 presidential campaign at the University of North Carolina at Chapel Hill, and served as the head coach of the Duke University dance team. She loves reading fantasy novels, geeking out over Star Wars, binge-watching Supernatural, and dancing in her spare time. She currently lives in Lubbock, Texas, with her husband and two super adorable puppies.
WEBSITE / FACEBOOK / TWITTER / INSTAGRAM
Posted by Kris at 7:30 AM