Today we have the blog tour for The Protector by HelenKay Dimon! Check it out and get your copy today! 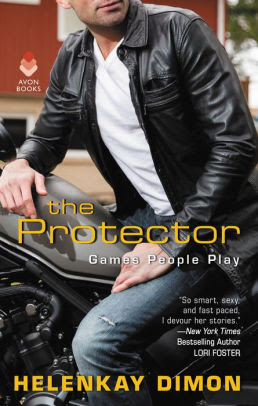 Salvation, Pennsylvania. The commune located in the small town was advertised as a modern Utopia: a place to live, share, and learn with other like-minded young people. Cate Pendleton’s sister was one of them. Now she’s dead—and Cate won’t rest until she finds out who killed her. Stonewalled at every turn, she approaches a DC Fixer for help and ends up with Damon Knox, a mysterious man with a secretive past. But Cate soon discovers that she not only needs Damon, she wants him, which isn’t good—for the attraction brewing between them will only lead to complications that can turn into danger . . .   Damon has tried to erase the hellish memories and the evil that happened in Salvation ever since he left a long time ago. Still, he can’t turn his back on Cate. As Damon works with Cate to uncover her sister’s killer, he finds himself drawn to her more and more. But how will she feel about him when she learns about his connection to the place?   Joining forces to uncover the truth, they must stay one step ahead of a cunning killer who’s bent on not being exposed.


Get Your Copy Now:

Catch Up On the Series!

The Protector delivers yet another wonderfully woven romantic suspense story for it's characters, Damon and Cate.

Cate wants answers, she wants the truth, that her sister was murdered and why.  She finds herself in danger while seeking those answers herself, so she gets help, in the form of Damon - a man who she finds annoys her as much as excites her.

Damon never wants to return to Salvation, He's got nothing to gain from a return there and yet the moment he's given the information on Cate and knows the danger she's in, he can't really say no. But Damon will do things his way and that means holding some things tightly.

I loved the interactions between these two from the start,  that though the chemistry was there, it wasn't clear yet how things would go between them.  Cate's a strong woman, she knows what she wants, but she also knows when she's over her head. Damon knows what he's coming against, knows the way they manipulate, and yet finds himself all in to the situation anyways.  With just the right hints of danger, touches of suspense and a romance developing, The Protector will suck you into it's depths and hold you captive as you work through it all with Cate and Damon.

HelenKay Dimon spent the years before becoming a romance author as a...divorce attorney. Not the usual transition, she knows. Good news is she now writes full time and is much happier. She has sold over forty novels and novellas to numerous publishers, including HarperCollins, Kensington, Harlequin, Penguin Random House, Riptide and Carina Press. Her nationally bestselling and award-winning books have been showcased in numerous venues and her books have twice been named "Red-Hot Reads" and excerpted in Cosmopolitan magazine. She is on the Board of Directors of the Romance Writers of America and teaches fiction writing at UC San Diego and MiraCosta College. You can learn more at her website: www.HelenKaydimon.com

a Rafflecopter giveaway
Posted by Kris at 8:17 AM